With infant nutrition based on goat milk, which the organization sells under the Kabrita brand, Ausnutria has a 60 percent market share in China and is number one in the world. Outside China, sales are growing in the Americas, South Korea, Russia, the Middle East and Europe.

This week Ausnutria reported its annual figures. In 2019, the company made a profit of 120 million euros, an increase of almost 62 percent compared to 2018. Sales rose by more than 25 percent, from 691 million euros to 863 million euros.

The Dutch company Ausnutria B.V. is an important part, both strategically and in terms of contribution to results, according to Bart van der Meer, Board member and CEO of Ausnutria Dairy Corporation. Ausnutria Netherlands is currently working on large investments projects. In addition to upgrading the production locations in Kampen, Ommen and Leeuwarden, Ausnutria is also working hard to expand the production site in Heerenveen.

“Ausnutria’s strategic policy has led to a good positioning and starting position. Investments in upstream facilities, building an oiled downstream sales team and network, as well as building a strong R&D team and strong quality control, are pillars that will further strengthen our position in China and around the world,” says Bart van der Meer.

Ausnutria sees the positive developments in recent years continuing in 2020. “The impact of the coronavirus is not predictable, but will be temporary, in the opinion of experts and based on experience in China,” says Bart van der Meer.

Since the outbreak of the virus in China, Ausnutria has taken immediate measures to protect its employees from contamination and continues to do so as the virus spreads throughout the rest of the world.

The virus appears to be under control in China. At present, the virus does not cause insurmountable problems for Ausnutria’s business operations in the Netherlands and foreign branches. Bart van der Meer: “All precautions are aimed at safeguarding the health of our employees while guaranteeing the continuity of our production processes. This is supported by the government by categorizing jobs in the food supply as crucial professions.”

With regard to the production and export of its products, Ausnutria has taken measures to ensure continuity. Bart van der Meer: “Of course we keep a close eye on developments and we are in close contact with our suppliers in order to be able to quickly anticipate on these developments.”

Interested to learn more about our brands and our company? Check out our other news posts!

Visit our virtual booth at the 6th World Congress of the PGHAN!

The Ausnutria Nutrition Institute and our brand Kabrita will be present at 6th World Congress of the PGHAN! Please feel free to visit our booth and have a chat with our employees. The WCPGHAN will be held from June 2nd till June 5th, 2021 as an online congres. The programme has been accredited by the … 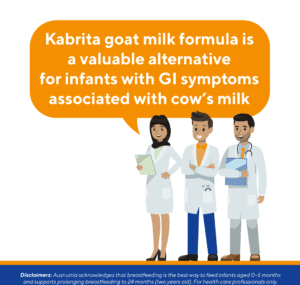 A survey about GI symptoms in infants was completed by 1868 physicians (HCPs) in the Middle East and North Africa. 70% Of the HCPs indicated that GI symptoms may be related to the proteins, carbohydrates and lipids of cow’s milk. Can goat milk formula be of value for infants with GI symptoms associated with cow’s … 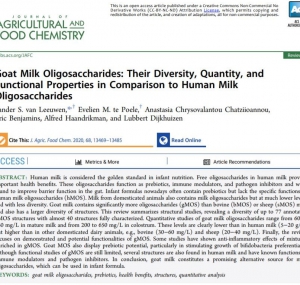 New publication by the ANI on goat milk oligosaccharides

A few weeks ago our research team published a new review paper in the Journal of Agricultural and Food Chemistry on oligosaccharides found in goat milk. This paper is part of one of our extensive research programmes. The current review paper was published in collaboration with the University of Groningen (RUG) and CarbExplore. The conclusion …