Comparison of the digestion of caseins and whey proteins in equine, bovine, caprine and human milks by human gastrointestinal enzymes

The aim of this study was to compare the digestion of milk proteins from different species using an in vitro gastrointestinal model. Raw and heated milks from bovine, caprine, human and equine species were digested by human digestive enzymes. Digestion was performed in two 30-min sequential steps by digestive juices from the stomach (pH 2.5/37 °C) and from the duodenum (pH 8.0/37 °C). The degradation patterns of the milk proteins were visualized by SDS-PAGE and quantified using the ImageQuant program. Caseins in the equine milk were rapidly digested by the gastric juice in contrast to the caseins from the other species. During the subsequent digestion by the duodenal juice most of the caseins from all species were degraded within 5 min, and within 30 min only traces of caseins were detected. The mean casein micellar size varied between species in the range of 146.0–311.5 nm (equine > caprine > bovine > human). The α-lactalbumin from all species appeared to be very resistant to both gastric and duodenal digestions. A similar trend was shown for β-lactoglobulin from bovine and caprine milks, of which ∼ 60% intact protein remained, while only 25% remained intact in equine milk after total digestion. Equine milk contained a high amount of lysozyme, of which 60% remained intact in the present study. In heated milks from all species, only α-lactalbumin degradation increased approximately 12–20% in comparison to the raw milk. This study shows that equine milk with fast digestible proteins could be considered as a replacement for bovine milk in the diet of people with special needs, such as infants and the elderly. 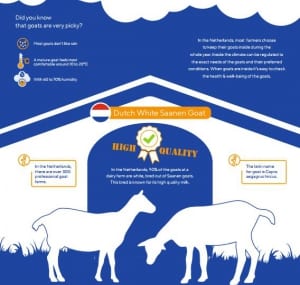 Interested to learn more about our Dutch Saanen Goats? Get your goat-knowledge up to date by reading this infographic. Reading time: 2 minutes. 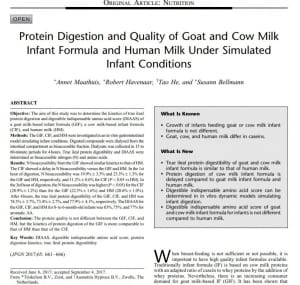