Palm Oil and Beta-palmitate in Infant Formula: A Position Paper by the ESPGHAN Committee on Nutrition

Background: Palm oil (PO) is used in infant formulas in order to achieve palmitic acid (PA) levels similar to those in human milk. PA in PO is esterified predominantly at the SN-1,3 position of triacylglycerol (TAG), and infant formulas are now available in which a greater proportion of PA is in the SN-2 position (typical configuration in human milk). As there are some concerns about the use of PO, we aimed to review literature on health effects of PO and SN-2-palmitate in infant formulas.

Methods: PubMed and Cochrane Database of Systematic Reviews were systematically searched for relevant studies on possible beneficial effects or harms of either PO or SN-2-palmitate in infant formula on various health outcomes.

Results: We identified 12 relevant studies using PO and 21 studies using SN-2-palmitate. Published studies have variable methodology, subject characteristics, and some are underpowered for the key outcomes. PO is associated with harder stools and SN-2-palmitate use may lead to softer stool consistency. Bone effects seem to be short-lasting. For some outcomes (infant colic, faecal microbiota, lipid metabolism), the number of studies is very limited and summary evidence inconclusive. Growth of infants is not influenced. There are no studies published on the effect on markers of later diseases.

Conclusions: There is insufficient evidence to suggest that PO should be avoided as a source of fat in infant formulas for health reasons. Inclusion of high SN-2-palmitate fat blend in infant formulas may have short-term effects on stool consistency but cannot be considered essential. 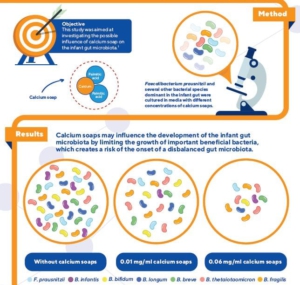 The effect of calcium palmitate on bacteria colonizing the infant gut

Short summarizing infographic on Ausnutria’s research, in collaboration with the University Medical Center Groningen, on the effect of calcium palmitate on tha bacteria colonizing the infant gut. Did you know that infant formulas with high levels of β-palmitate can reduce calcium soap formation and therefore potentially have an influence on the linked negative health outcomes? … 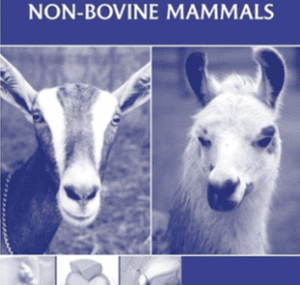 Handbook of milk of non-bovine mammals