The early phase of life is a period of rapid growth and development. Minor digestive disturbances in both breastfed and formula-fed infants are often reported. These disturbances could be due to the maturation of the digestive and immune system as well as the development of the gut microbiota. Gastrointestinal symptoms were seen in 54% of infants in a population-based prospective study.1 These infants were (partially) breastfed and formula-fed. The most frequently reported symptoms of discomfort were hiccups, crying, bloating, flatulence and difficulties related to stools (hard and soft stools) (see figure below).1,2,3 Some of these minor disturbances could become more severe and could be diagnosed as functional gastrointestinal disorders according to the Rome IV criteria.

Digestive disturbances in the infant can lead to parental concerns.4 Parents can experience stress and suffer from lack of sleep.4,5,6 Although the infants may experience minor disturbances, most of the infants are otherwise healthy and are not diagnosed for functional gastrointestinal disorders and do not need any medical treatment.4 Healthcare professionals can differentiate between functional gastrointestinal disorders and minor discomfort that the infants will naturally outgrow. Many parents may switch nutrition in their search for relief of their infant’s digestive disturbances. Switching formula can be stressful and could result in lower volume intake and should preferably be prevented (data on file).

An infant formula that is easier to digest may prevent or resolve digestive discomfort and the need to switch to another infant formula. According to parents, gentle infant formula is easily digestible and is associated with relaxed feeding moments and more joyful moments with the infant (based on US market research among parents).

Ausnutria’s research team started to investigate the beneficial effects of Kabrita formula on comfort in infants with mild gastro-intestinal (GI) issues.7 In this randomized controlled study, 9 infants used Kabrita formula for 28 days, while a control group of 7 infants used a CMF with probiotics supplements. The use of a CMF in combination with Lactobacillus reuteri is the standard medical treatment for infants with mild GI complaints in Spain.8 All infants were aged between 1 and 3 months and had mild GI discomfort based on a total CoMiSSTM score between 6 and 12. CoMiSSTM (Cow’s Milk-related Symptom Score) is a scoring tool ranging from 0-33 that sums up the GI-related complaints in 5 different categories, namely crying, stools, reflux, skin and respiratory issues. A CoMiSSTM score of 0 indicates ‘no discomfort’, while a CoMiSSTM score between 6 and 12 indicates ‘mild discomfort. After two weeks intervention, the GI discomfort significantly decreased in both groups. However, the GI discomfort decreased faster in the Kabrita group compared to the control group after 14 days of intervention. The decrease in GI discomfort was mainly due to decreased crying and improved stool consistency.

Based on this study, it can be concluded that Kabrita formula can decrease GI discomfort faster (nonsignificant trend) in infants with mild GI issues as compared to CMF.7

An improvement in GI comfort was also seen in a survey amongst Kabrita consumers in the USA (internal data). One hundred and eleven questionnaires were filled in by parents of infants using Kabrita stage 3. Parents reported that GI complaints had improved after switching to Kabrita, especially gas, skin symptoms and stool consistency improved significantly (see figure below, * p< 0,05, ** p< 0,001). Moreover, the young children who still experienced GI discomfort after switching to Kabrita formula had less severe GI complaints than before their switch. Overall, parents reported positive changes in discomfort in young children after switching to Kabrita formula.

The positive effects of goat milk formula on comfort in infants were also shown in other studies testing goat milk formulas. One study investigated the effects of a goat milk formula in infants with constipation, aged between 1 and 4 months of age.9 The enrolled infants were ill and visited a paediatric clinic for treatment of their constipation. Twenty infants completed the study and had softer stools after three weeks of GMF. In addition, the number of hours that infants cried reduced significantly during the period in which they took GMF from 3 hours to 1 hour per 24 hours. Parents reported a change in infant behaviour within three to five days after starting with the GMF. This indicates that a goat milk-based formula can improve GI comfort, although well designed studies are warranted to confirm these findings.

Cow’s milk allergy (CMA) and cow’s milk intolerance (CMI) are the major cow’s milk disorders observed in infants.10 CMA and CMI are often clinically used interchangeably due to similar clinical presentation, yet CMA and CMI are discrete disorders which differ in etiology, prevalence, prognosis, and management strategies. CMA is an immunologically mediated reaction to the cow’s milk proteins beta (ß)-lactoglobulin (the most abundant whey protein in cow’s milk) and casein. While CMI arises from the body’s inability to digest specific components of cow’s milk such as proteins, lactose and fats. Zooming in on CMI, there are several hypothesis for the mechanism of action. Recent studies demonstrate that bovine β-casomorphin-7 (BCM-7) released from β-casein A1 is an important contributor to CMI.11-14

In collaboration with the Egyptian Acadamy of Pediatrics, Ausnutria’s R&D team investigated the understanding of physicians regarding CMA and CMI in the Middle East and North Africa region.10 Together with an expert panel, supervised by Prof. Vandenplas, the questionnaire was developed. The survey was send out to 2500 health care professionals practising in the region. In addition, the potential role of goat milk formula was also explored as an alternative nutrition for infants suffering from CMI was.

The paper concluded that doctors in general are aware of the difference between CMA and CMI but practice seems to be more complex. Next to this, goat milk formula was evaluated as a promising alternative for infants with CMI, due to it’s beneficial nutritional profile as 72% of the doctors mentioned a better protein digestibility of goat milk formula compared to cow’s milk.

It is important to highlight goat milk formula is not a suitable alternative in case of a medically diagnosed CMA, because of the possible cross-reactivity.

Kabrita results in a well-balanced gut microbiota to support comfort

Although the microbiota results are promising more clinical research is needed, as the results are based on a limited number of studies. This also applies for the effects of Kabrita formula on comfort in infants. The first results on GI comfort are promising but are based on studies with limitations. A well powered, randomized, controlled study is
warranted to more thoroughly study the effects of Kabrita formula on GI comfort.

10. Bahbah W.A., et al. A Survey to Identify the Current Management of Cow’s Milk Disorders and the Role of Goat Milk-Based Formulas in the Middle East and North Africa Region. Nutrients. 2022 Mar 3;14(5):1067.

13. Jianqin, S.; Leiming, X.; Lu, X.; Yelland, G.; Ni, J.; Clarke, A. Effects of milk containing only A2 beta casein versus milk containing both A1 and A2 beta casein proteins on gastrointestinal physiology, symptoms of discomfort, and cognitive behavior of people with self-reported intolerance to traditional cows’ milk. Nutr. J. 2016, 15, 72.

Documents in this publication 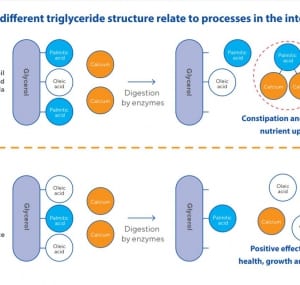 In human milk, about 50% of the energy is supplied to infants as fat. However, fat is not only necessary as a source of energy, but has many more functions, such as developing the infant’s brain and vision, supporting the structure of the cells, maintaining the body temperature, and making hormones.1 The fat composition of … 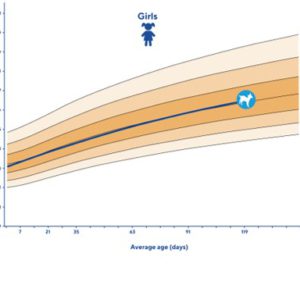