Methods: The study was conducted in Auckland, New Zealand. This was a double-blind randomized controlled trial. Newborn term infants were randomized within 72 h of birth to GMF or CMF. Milk formula powder in single serve sachets were reconstituted and fed to infants from trial commencement until age 168 days. No other formula given from randomization until age 168 days. Infant weight, length and head circumference were measured at birth and age 14, 28, 56, 84, 112, 140 and 168 days. Bowel motion frequency and consistency, sleeping and crying patterns and adverse events were also measured.

Conclusion: Growth of infants fed GMF is not different to that of infants-fed CMF. 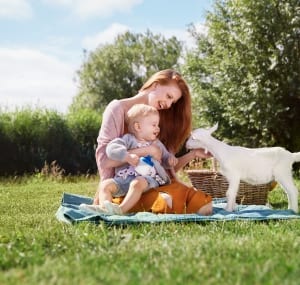 Short explanatory video on the suitability of goat milk as as a safe source for infant formula. Viewing time: 1,5 minutes.

Dr. Tao He, Nutritional Scientist in the R&D Nutrition Team of Ausnutria B.V., presented the latest insights on goat milk based nutrition during our Nutrition Expert Academy last November.